Just across the road from our library on Bishop Street once stood the Jacob’s Biscuit factory where thousands of delicious treats were made every day! 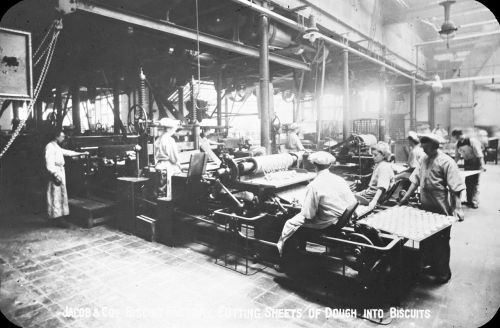 The Jacob’s were a family from Waterford.  They were Quakers and they were also bakers.  In 1885 they invented the Cream Cracker, their best-seller.  In 1893 King Fredrick Leopold of Germany ordered 6 tins of the crackers.

Rosie Hackett, worked there.  She was involved in fighting for better conditions for workers. In 2014 the Rosie Hackett Bridge opened between O’Connell Bridge and Liberty Hall.

The factory was huge and went all the way around the corner past where the Tesco Express is today.

In 1976 the factory closed and in 1987 there was a big fire that destroyed the building.

You can still see the name JACOBS carved in stone and the remains of a tower where the factory once stood.